Zaib, got married at a young age, her husband was a laborer earning Rs 10,000 a month, while she helped him by picking cotton to support the family. Her kids were unable to study due to limited means. As fate would have it, her husband, the sole bread winner was diagnosed with terminal tuberculosis 15 years ago and succumbed to the illness a few weeks later. Devastated and emotionally wrecked, Zaib found herself helpless with 4 young kids and no means of income. She started doing odd jobs to put food on the table every day, and her two sons started working as well. One cleaned dishes in a hotel, while the other started working in a small bottling company. 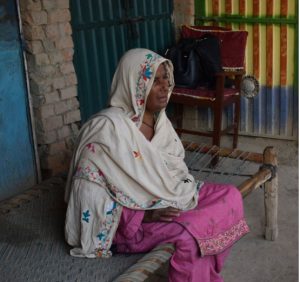 The elder son grew proficient in operating a bottling plant and consulted his mother about starting a bottling business of their own. They required capital for which Zaib consulted one of her friends, who then introduced her to AGAHE Pakistan. Zaib got a loan from AGAHE Pakistan and then setup the equipment for the soda water bottling business in one of the rooms in her house – under her son’s supervision.  After acquiring the concentrate from a nearby supplier, they started working day and night and were able to fill 10 crates of bottles a day of soda water. The business further got its certification from the food department, thereby opening avenues for supplying soda bottles to nearby stores/markets. Since then, there has been no looking back as their business has picked up really well, with increased sales during the summer months. Both her sons now work with her on the bottling plant.

Looking ahead, she plans to expand further by installing a chiller to increase storage capacity, while setting up a small tea and food stall for her younger son. The youngest son is going to school, more rooms have been added to the house, and Zaib is able to save sufficiently for her daughter’s wedding in the coming years.

PMIC applauds the efforts put in by AGAHE Pakistan in supporting such hardworking women, who remain resilient in the face of challenges and become an inspiration for other women in Pakistan.